A complete listing of free-to-read web-publications/comics, by J. M. DeSantis.

Gentleman Cthulhu is JMD’s on-going web-comic, while Chadhiyana has the occasional web-comic

Book of Lies is an on-line web-comic anthology with stories written by Paul A. Newman and illustrated by various artists. J. M. has lent his talents to the Prologue of the web-comic (a prose story).

Now defunct, the site once contained a full listing of the comics J. M. DeSantis created for Game-Flush.com, under the moniker The Corporate Ninja. It featured various humourous short comics both of recognisable video game characters and members of the Game-Flush Staff.

All of J. M. DeSantis’s Game-Flush.com comics were collected in a chapter about the site in his part-memoir, part writing and art collection,
J. M. DeSantis: The First Ten Years. 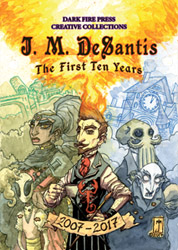