Just a small update this week, folks. I’ve been rather busy the past few weeks, juggling a bunch of different things, and amongst them I’ve been making changes and adjustments to this site. Last week, the menu bar went through an update, and since then I’ve even updated it further. Nothing has been removed from the site that was formerly here, but if you can’t find a page, chances are it has been designated to the Miscellanea section (which will continue to contain everything which does not have its own heading).

I’ve also updated my bio to better reflect my new focus and concentration on writing and illustrating my own stories. Some of it has only been minorly altered, whilst some new information has been added to it as well. I’m sure few of you will find it fascinating, but all the same, you can read the new bio on the About Page.

Additionally, and perhaps much more interesting to you, you may have noticed the new graphics on the blog posts. For a long time now I’ve felt the site needed this, and it’s a throwback to my Game-Flush days when we had banner images for each type of post we made. Two weeks ago when I made the big announcement and included what I thought was a very attractive banner graphic with it, I felt it was finally time to make some banner graphics (as if I don’t have enough to do already). 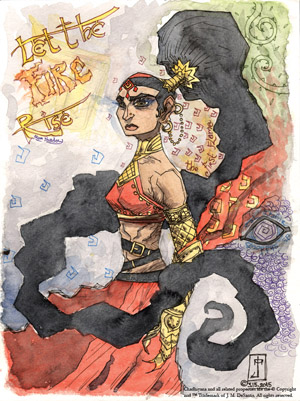 As for the style, I’ve been very taken with the two recent Chadhiyana pieces I painted in preparation for the big announcement three weeks ago. There’s just something about the style and energy of them which draws me in. More, I feel the style of the pieces come closer to what I’ve always wanted to capture in an artistic sense not just with the Chadhiyana stories, but with my watercolours, generally.

Having the new banner graphics, I hope, will make the blog much more attractive in that it will have more images on it, and not look like a solid wall of text (a daunting vision for anyone). Though I will at times use other images on the headings of my blog posts, and though I know at some point the present graphics will become a little redundant, for now, they will at least give me a ready-made image to go to in a pinch.

That said, I haven’t finished all of the graphics at this point, but two have been made for my handlebar moustache guide (including the new sidebar graphic), as well as a graphic for generic blog posts and one for any news or announcements. I’ve included those below, for your convenience.

Other than that, I’m just hard at work. Perhaps a little too hard, as I’m very much looking forward to my Spring Break from teaching this year; I need to catch up still–on both sleep and work. Don’t forget I have the East Coast ComiCon coming up next Saturday and Sunday. Enjoy some of the new content. More is coming. Cheers!