I’ve only been off from writing my blog for a week, and yet it feels like forever. So please excuse me as I write off some of the rust. Though I’ve been writing every day, I’m suddenly stumped with the prospect of having to write a blog piece. So things may move in a sort of stream-of-consciousness sort of way. But, after all, that’s the benefits of writing a blog. It doesn’t have to be about anything really (though, the best blogs are about something). END_OF_DOCUMENT_TOKEN_TO_BE_REPLACED

If you follow me on social media, you would have seen that I posted a terrifying and disappointing picture on Friday (and with how often I’m using social media for updates, you should be following me there, if you don’t already). Yes, it’s true. I took a scissors to those luscious curls and shaved my face bare. But I’m sure the question is, why did I get rid of my much beloved, constantly complimented handlebar moustache? END_OF_DOCUMENT_TOKEN_TO_BE_REPLACED

Just a small update this week, folks. I’ve been rather busy the past few weeks, juggling a bunch of different things, and amongst them I’ve been making changes and adjustments to this site. Last week, the menu bar went through an update, and since then I’ve even updated it further. Nothing has been removed from the site that was formerly here, but if you can’t find a page, chances are it has been designated to the Miscellanea section (which will continue to contain everything which does not have its own heading).  END_OF_DOCUMENT_TOKEN_TO_BE_REPLACED

As I expected, I decided to post just one additional part of my Handlebar Moustache Guide. As I’ve said in the past, I’ve written considerably more content than what I’ve published on this site, but I have other designs and aspirations for the full guide and so have kept it to the bare essentials here. That said, after publishing Part 5, I felt this web-version of the guide was somehow incomplete. Thus, this sixth and final part. I hope you’ve enjoyed the present guide and found it useful. Should the full version ever see print, rest assured I will make that announcement on this site. END_OF_DOCUMENT_TOKEN_TO_BE_REPLACED

The day has finally arrived; the fifth part of my handlebar moustache guide is now available. I do apologise for the wait (I’ve seen a number of hits on the fourth part since it’s posting), but there were a number of other things I had to blog about in between. Of course, having posted this fifth part, I wonder if it will be the final blog post in this series. After all, what I’ve posted here is only a fraction of what I’ve written for the guide–which is growing longer still–but with tentative plans of turning it into a book, of sorts, I’m unsure that posting any more of the guide would be wise. So, for now, this is the final part, but expect more, in some form or another, in the future.  END_OF_DOCUMENT_TOKEN_TO_BE_REPLACED

Another week and another installment of my Handlebar Moustache Guide. Supplies have been thoroughly written about. Hair growth (and patience) has been covered. I’ve even touched upon grooming. And now this week we finally come to that most coveted secret of having a handlebar moustache… END_OF_DOCUMENT_TOKEN_TO_BE_REPLACED

Well, we’re back again this week with yet another installment of my Handlebar Moustache Guide. This week features a slightly smaller section of the guide (covering grooming), but that’s only because the next section (the much awaited curling section) was too large to be paired with this one. And who knows? The curling section may even have to be broken up into two separate posts. As I’ve said, this guide just keeps getting longer and longer as I go. Likely now, with the end of the year holidays coming up and my penchant to write a year’s end reflection post, I may not even finish posting it by the end of 2014. But at least I’ll have no shortage of subjects to blog about for a while…or subject, that is. END_OF_DOCUMENT_TOKEN_TO_BE_REPLACED

As promised, so it will continue until I have covered the subject extensively (within reason, that is). As I wrote last week, this guide grew and grew as I began writing what was intended to be a single, brief blog post about growing, maintaining and styling a handlebar moustache. I’m still writing this guide even as of this blog post (I’m now around 3,000 words and counting), and so I haven’t the faintest idea how many parts the guide will be split into or for how long I’ll be publishing this guide on my blog. Considering its already unpredictable size, I suspect it will be some weeks still before the final part is published. Indeed, it’s quite possible this guide will take up the remainder of my blog posts for the year! No matter. I’m having a blast writing this thing, and I hope you’re enjoying reading it, as well (and getting some useful information at the same time). So without further adieu, I give you part two of my Handlebar Moustache Guide. END_OF_DOCUMENT_TOKEN_TO_BE_REPLACED

As I wrote about last week, I made the decision recently to keep my handlebar moustache around for a while longer. It had already been my plan to write a blog piece about styling, trimming and maintaining a handlebar moustache, based on my experiences, in honour of Movember this year. When I decided to keep the moustache–as it turned out to be so popular I was all but begged to keep it–it solidified my decision to write this blog piece. Little did I know that I would have so much to say on the subject. In fact, I’m still writing the guide as of this posting. At 2,000 words and counting, The Gentleman’s Guide to the Growth, Styling and Maintenance of a Luxurious Moustache (working title; also possibly Luxurious Moustache: A Gentleman’s Guide to the Growth, Style and Maintenance of a Handlebar Moustache) is too large to publish in a single blog post. So I have decided to publish the guide in installments. END_OF_DOCUMENT_TOKEN_TO_BE_REPLACED

What Was I Thinking?! 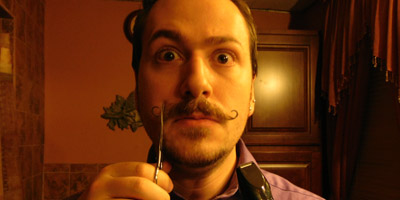 Much to my surprise, my handlebar mustache has proven very popular. Of course, I won’t make the claim that each and every person I come across loves the thing, but generally speaking, there seems to be an uncanny amount of people who come up to me asking for a picture with me and my mustache or simply to say what a great mustache it is. Even Chadhiyana (my most popular creation to date) doesn’t quite seem to rival the attention my mustache gets–well, that may not be true, but it certainly does seem that way. That said, one may wonder why I planned to shave the thing off following Halloween this past weekend. END_OF_DOCUMENT_TOKEN_TO_BE_REPLACED