Although so little is yet available about the game—just the trailer (below) and two interviews—I can’t help but add my own speculations to the mix. As it is, I’ve been a fan of the Soulsborne games since Demon’s Souls, and to me it seems like Elden Ring is going to be a culmination of all of Miyazaki’s work since that title’s release. So I have quite a few ideas about what From Software is planning with this new IP.

There isn’t much to speculate on here. As per Miyazaki, George R. R. Martin’s involvement was in writing the lore for the game. Essentially, Miyazaki gave Martin some ideas of what they were going for and let the authro go wild with his imagination. That writing became the foundation upon which the game’s story is being built. And knowing GRRM’s ability to write intricate characters and factions, I’m certain he did a wonderful job.

Like all Soulsborne games of the past, the lore will be delivered through NPC dialogue, item descriptions, and environments, and my suspicion is (based on a quote I can’t seem to find) that this will be more of a highlighted feature of the game, as the player is set to the task of learning what happened to the world following the breaking of the Elden Ring.

As much as people are both apprehensive and getting excited about Miyazaki’s statement that Elden Ring is an open-world game, I don’t think Elden Ring will be an “open” in a traditional sense. (I’m not a fan of open-world games, never being able to finish Dragon’s Dogma and having gotten bored with Skyrim only halfway though; though I’m trying Witcher 3, and at least will read books.) The exact quote from Miyazaki is this:

There are many definitions to the term “open world,” and I might not be phrasing it correctly, but we have simply tried our own approach to a game with a large, open field to play in. (from the Xbox Wire interview)

Miyazaki is also quoted as saying that “he believes that Elden Ring’s NPC characters are more compelling than in his previous works” (IGN) and that “[v]illages will be the dark dungeon-like ruins that you have come to expect from us” (IGN). To me this says that, while there will be the familiar NPC side-quests of previous Soulsborne games, albeit on a larger scale, there won’t be Message Boards or mindless and meaningless side-quests. The world will be vast, however, with intricate dungeons and sections connected by a large expanse between.

In this way perhaps the game will be closer to Demon’s Souls, but instead of using Archstones to traverse different lands, you’ll have a horse (confirmed in the IGN interview) with villages and obstacles between those lands. The player will be able to choose which area to go to and when, furthering the “open” exploration of the game.

Why do I think this? Well, Elden Ring seems to draw heavy inspirations from Norse Mythology (reported very early on when the project was still referred to as Great Rune; source: reddit.com/r/GreatRune/). One of the key concepts in Norse Mythology is the tree Yggdrasil which connects the Nine Worlds, including those of the gods, the Giants, the Elfs (“elves” was a Tolkien creation), and humans. Miyazaki is quoted as saying that the Elden Ring is not an actual ring, but rather “a mysterious concept that defines the world itself” (Xbox Wire).

More, looking at the logo, one can see there are four circles overlapping similar to a Ven Diagram, suggesting their connection. Perhaps, in fact, this is the idea of the Elden Ring, that there are these separate worlds that are connected, and each will be individually and intricately built, with a vast land between them. Why four instead of nine? Well, it’s easier to build, for one, and for another, Miyazaki does seem to like the number (and he’s known for repeating themes in his games): Dark Souls had Four Lord Souls and the Four Kings, and the four knights of Gwyn.

To go a bit further, we may very well be taking part in this world’s version of Ragnarok (Miyazaki often uses the end-of-the-world theme as well) and that the breaking of the Elden Ring created these separate areas (worlds). Each will be unique and have their own NPCs attached to them, with their own intricate side-quests. It’ll be up to the player to decide what world to tackle first.

But essentially I think the player will be gathering something from each world and using this thing to bring about the end of the world so that it can begin anew (as in Norse Mythology). 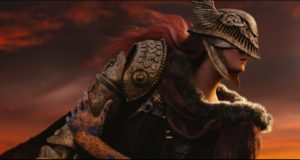 There seems to be some mention that the combat system will be similar to previous titles, but also more open. Considering From Software used Bloodborne and Sekiro as a way of testing other combat systems, my theory is that players will be able to customise their play style more than in any other Soulsborne game (customisation seems to be another key element of Elden Ring).

I think there’s a fair chance players will be able to engage in combat in a variety of ways, not just melee or magic, but perhaps with even more options such as stealth (Sekiro), fast-paced dodge-and-counter (Bloodborne), shield and tank (Demon’s Souls), parry (Dark Souls), and a number of other types and combinations I’m not even thinking of.

There hasn’t been anything definitive about this mentioned or even speculated on yet (from what I’ve seen), but based on the above, I’m thinking Multiplayer is going to be as massive as the world itself.

Something tells me it will be closer to the scale of a MMORPG, but without everyone running around on the same server at one time. It could play into the separate world theme I’m positing above, in that perhaps in each area/world you can link up with other players to explore, but that’s all complete supposition.

Of course, I’m sure there will be an invasion mechanic as well. Perhaps that will also be linked to the separate worlds somehow. And then one begins to wonder if some better utilised world-tendency system like in Demon’s Souls might not come into play.

Now, of course, all of this is just speculation, based on what little information we have and my best guesses having enjoyed these games for a decade. I do firmly believe Miyazaki is looking to bring together a host of successful ideas from previous titles, as well as some new concepts we’ve yet to see in a From Software game (again, such as horses).

But whatever Elden Ring ultimately turns out to be, at this point in time, I doubt we can even imagine it…