Farewell to The Spider’s Web 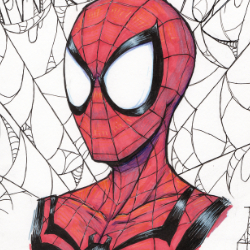 It’s rare I create superhero art—unless it’s requested, and due to the focus of my art, that’s still a rarity—but this was done for a special occasion.

Saturday, 7 January, was the last day for The Spider’s Web in Yonkers, NY, and the above Spider-Man was a gift to its owner, Paul, as a thank you for all the opportunities and great times he, Andrew, and the rest of the crew provided in the short time I had been frequenting the store. Though The Spider’s Web had been there for ten years, I’ve only gotten to know the spot over the past two years, and it’s difficult to explain how wonderful the place was.

It had been on my radar for a few years before I finally took the trip from New Jersey, and that didn’t happen until Paul and Andrew traveled to TerrifiCon in 2021 and came to my table to invite me down to the store for an event later that month. Of course I said yes (I try to meet requests, whenever I can, and they seemed so happy to meet me), but I didn’t expect what I was given when I arrived.

It wasn’t the opportunity to sell books and artwork (though I was invited to do that), but rather the experience of the welcoming community The Spider’s Web crew had built and cultivated there that made the trip worth it. I was treated like an old friend being invited to dinner, and more, that attitude didn’t only extend to me. Paul and Andrew treated everyone like family. The other creators, the frequent customers, and the people coming in for the very first time were all treated with that same warm familiarity. Having gotten to be a part of that even for a few hours, I felt glad I said yes to the invitation and planned to get back to the store again soon.

The pandemic had some effect on me getting there more often, but I tried to get back into the store as often as I could, and I was invited back a few other times for events. (I even had my first Free Comic Book Day appearance at that store in May.) It also just happened to be a favourite spot of a few of my artist and writer friends who lived in or near the area (presently or in the past), and there were other creatives and readers I met by coming to the store—all of whom seemed to have the same opinion and attitude as the people who made that place home.

The news of its closing came as a shock. I was planning to ask them to start a pull list for me this year despite the store’s distance from me (that’s just how much I loved this place and the people there), and I was hoping I’d be invited back for some more events. It would’ve been great even to start meeting up with a few of my friends in the area and have some working meetings at the store (had Paul been okay with that), but it was only a few days before they closed that I saw the news that Paul had made the decision to close the store.

I wish I had known about the place back when it first opened, or had decided to visit before the pandemic hit only because I’m envious of the friends I have who had been going there from the beginning. Then again, Paul always made you feel like you had been there to help open the store on the first day. I’m heartbroken to see The Spider’s Web close, but I’m also happy I had the opportunity to go there. It’s been a long time since I had a comic shop I considered to be “my spot” and you don’t find many places as special as The Spider’s Web.

Thank you to Paul, Andrew, and everyone else who was there, on every side of the tables or counters. I wish you all the best in whatever happens in the years to come. I’ll stay in touch, but I will miss The Spider’s Web. It was just a great place to be.

Back to Top | No Comments
Tags: Spider-Man, The Spider's Web
Cancel Reply