Just a brief reminder that not only is the Rosarium Publishing IndieGoGo campaign still going strong (indiegogo.com/projects/rosarium-publishing-the-next-level), but also that this weekend I’ll be exhibiting at the East Coast ComiCon for its second year in Secaucus, New Jersey (April 16th & 17th). So begins (officially) my convention season (though I did attend the Black Comic Book Festival in January with Rosarium Publishing) and so continues Rosarium Publishing’s campaign to raise money for printing and promotional costs for books such as the forthcoming first Chadhiyana trade (collecting issues 1 – 6 of the series).

For those attending the convention this weekend, I’ll be in Artist Alley, which, as far as I recall from last year, was located on the right side of the Meadowlands Expo Center. As always, I’ll have prints (new and old) for sale, comics, books, bookmarks and I’ll be offering convention sketches for the duration of the weekend (which have been increasingly popular in the past year, which is great because I love doing them).

For more information about the show (and where to find me thereat), visit eastcoastcomicon.com. And, of course, if you can’t make this show, you can always check the Events & Shows page on this site (jmdesantis.com/events) for an up-to-date list of appearances I’ll be making. 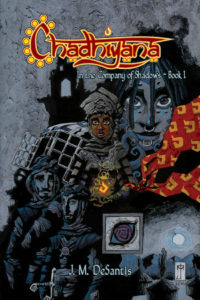 As for the aforementioned Rosarium Publishing crowdfunding campaign, if you haven’t contributed to it and you’re a fan of my work, I’m asking that you consider doing so, especially if you’re planning to purchase the first Chadhiyana trade when it’s released in January 2017 (tentatively).

Through the campaign, you can pre-order the book, and with your pre-order you will get an exclusive 4-page Chadhiyana comic with a new, standalone story featuring the character (and I’m already writing ideas for what this comic will be). Plus, of course, you’ll be helping Chadhiyana’s publisher reach the next level in growth as a publishing company, and ensure there will be more Chadhiyana comics in the future.

For more information on the campaign and to contribute visit indiegogo.com/projects/rosarium-publishing-the-next-level.

Until next week, though hopefully I’ll see some of you over the weekend. Cheers!