2017 is already off to a roaring start. Over the past two weeks two of my comics, Chadhiyana #5 and Gentleman Cthulhu: Year One, were released online (the former by Rosarium Publishing). Then there’s the US Presidential Inauguration and everything happening around it (such as the Women’s March on Saturday). Even with all of that, this is something of an in between week for me. One of those weeks where I’ve been so busy with work, and so many gears are turning and plans are in motion, but there’s nothing official to announce. So I thought I’d take the time this week to just write a few updates and maybe (maybe) hint at a few things to come. 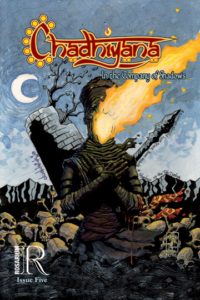 First, if you haven’t ordered your copies of either already (and I know some of you have), you can find Chadhiyana #5 on Amazon and comiXology (again, the comic is digital only until the trade), whilst for Gentleman Cthulhu I’ve used Indy Planet again. That said, expect a planned delay in the release of this week’s Gentleman Cthulhu comic. I’m going to put it out on Sunday. It’s for a reason, trust me.

As for Chadhiyana, and speaking again of the Women’s March, it has entered into my mind to create an image of the character which represents the current mindset of resisting Trump, his policies and behaviours. After all, I’m certainly vocal about my distaste for the man (to say the least) and when I created Chadhiyana it was partially to highlight some of the issues of inequality, prejudice and even abuse facing women today. Personally, I think it’s a great time for Chadhiyana. So, the gears are turning on that end, but I haven’t quite pinned down everything (in my mind) just yet.

Other than my two main projects, the Patreon page I’ve been hinting at for months is nearly complete. In fact it’s so close it’s ridiculous that I’m still writing that it’s not. I literally have to complete an introduction comic for the page and then all is ready to go. Perhaps I can pull this off for next week (?), but I’m working under an insanely tight deadline at the moment, so it’s really matter of when I can fit the finishing touches in. But please do keep an eye out. I’ll announce it on social media, this blog and to my mailing list as well (which you can sign up for also, if you haven’t already).

I’ve also been reading a lot more again (I’ve always been an avid reader, but I’ve been surprising myself with how quickly I’m reading through books of late). I’m beginning to consider more time spent on this blog writing about some of the books I’m reading, movies I’m watching and games I’m playing. Especially the Souls series (Dark Souls). I know last Spring I mentioned I wanted to write an entire set of blog pieces about the series, and that never happened, and with the final DLC coming out this Spring, the window on that is closing. Then, of course, there are just a number of other art, writing and business-related advice I could impart to my fellow peers (or interested fans). It would certainly add some richer content to my blog, and there’s a wealth of topics to write about.

Last but certainly not least, both chadhiyana.com and this site have been going through some tweaks to their colour schemes (which some of you may or may not have noticed). No, it’s not your monitors. I’ve just been trying to adjust the sites to make them a little more readable and make the colour schemes a bit more cohesive.

Other than that, and completely unrelated, I may (possibly) have a convention coming up next month, but nothing’s been finalised just yet in that regard, so I can’t say much.

So there it is. Hopefully a thing or two (or all of it) piques your interest, but next week I’d like to have something a little more concrete to write about. Until then…