As before posted, Chadhiyana: Rekindled is now available not only in digital formats on ComiXology and GlobalComix.com, but also in print on IndyPlanet.com!  END_OF_DOCUMENT_TOKEN_TO_BE_REPLACED

I’ve had so much going on in all directions (new books, upcoming projects, publishing as Dark Fire Press, interviews, conventions, etc) that it’s worth writing a single blog post that puts all the information out in one place. That’s exactly what this post is, and I may as well start with my new banner artwork as I return to exhibiting at conventions this week.  END_OF_DOCUMENT_TOKEN_TO_BE_REPLACED

2017 is already off to a roaring start. Over the past two weeks two of my comics, Chadhiyana #5 and Gentleman Cthulhu: Year One, were released online (the former by Rosarium Publishing). Then there’s the US Presidential Inauguration and everything happening around it (such as the Women’s March on Saturday). Even with all of that, this is something of an in between week for me. One of those weeks where I’ve been so busy with work, and so many gears are turning and plans are in motion, but there’s nothing official to announce. So I thought I’d take the time this week to just write a few updates and maybe (maybe) hint at a few things to come. END_OF_DOCUMENT_TOKEN_TO_BE_REPLACED

In the past month I’ve spend a decent amount of time (on my blog on jmdesantis.com) highlighting my online store (through Zazzle.com) though I haven’t taken the time to highlight the fact that more than one third of the roughly 100 items available on the store feature artwork from Gentleman Cthulhu–including three designs featuring the tentacled gentleman himself. More, as promised, Gentleman Cthulhu: Year One (the collection of the first year of GC comics which sold out at this year’s New York Comic Con) is finally going to be available to order online! END_OF_DOCUMENT_TOKEN_TO_BE_REPLACED

The wait is finally over! It’s time to celebrate! Today is the official release date for issue one of Chadhiyana: In the Company of Shadows!

Of course, if you follow this blog and my social media posts, you know that the book has been out for ten days already (on IndyPlanet.com and Amazon.com). Hopefully you’ve already purchased, read and enjoyed it. If you haven’t, today’s blog post is especially for you. END_OF_DOCUMENT_TOKEN_TO_BE_REPLACED

This week and next week, my blog posts are coming a bit early (I usually post new blogs on Wednesday on jmdesantis.com and Tuesday on chadhiyana.com–though the latter may officially change), as next Monday, July 13th, is the “scheduled” release date for issue one of Chadhiyana: In the Company of Shadows. I put scheduled in quotations, because if you’ve been keeping up with the recent Chadhiyana news, you know that my publisher (Rosarium Publishing) is actually ahead of schedule with the book’s release. END_OF_DOCUMENT_TOKEN_TO_BE_REPLACED

Sometimes Christmas comes early, and this year (for me) it has. Little did I know what was going to happen when I woke up today and got in the studio, but you know it’s got to be something big if I’m posting a second blog entry in the same week. A little over an hour ago I got some surprising and exciting news from Chadhiyana’s publisher, Rosarium Publishing… END_OF_DOCUMENT_TOKEN_TO_BE_REPLACED 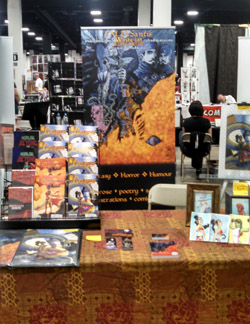 That said, I want to thank everyone who bought prints, commissions, bookmarks, and especially those who picked up the second edition of Chadhiyana. I hope you enjoy it, and continue reading the graphic novel, Chadhiyana: In the Company of Shadows on chadhiyana.com. If you weren’t at the show, you still have the opportunity to pick up a copy at the Baltimore and New York Comic Cons in the coming months. The comic is also available on IndyPlanet.com (print and digital) and the Inbeon Studios store (digital only). END_OF_DOCUMENT_TOKEN_TO_BE_REPLACED