I’ve had so much going on in all directions (new books, upcoming projects, publishing as Dark Fire Press, interviews, conventions, etc) that it’s worth writing a single blog post that puts all the information out in one place. That’s exactly what this post is, and I may as well start with my new banner artwork as I return to exhibiting at conventions this week.

The new banner art (right) is a great visual way to find me at shows (and it’s been over a year since I’ve had a new one). I’ve included this image on my Events page for anyone checking my upcoming appearances going forward. Though, the most imminent appearances are the three in a row I’m doing, starting this week:

At these shows, I’m going to have on-hand the following new prints I got ready this year: 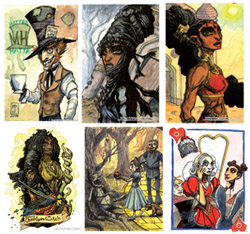 As well as all of the new titles I’ve published this year: And They Call it Mummy Love: A Gentleman Cthulhu Collection, J. M. DeSantis: The First Ten Years, Robert Phillips, Ghosts Are People Too, and The Tainted Ones.

If you’re not coming to any of the above conventions, but want one of these titles, click the images (to go to darkfirepress.com where there are links to buy them on Amazon, Barnes & Noble, ComiXology, and/or IndyPlanet). The only title not yet available is The Tainted Ones, but it’s been accepted and is just awaiting listing.

Aside from projects, I’ve also done the following interviews:

With Sheena McNeil at SequentialTart.com

During the interviews I spoke about the above projects and some upcoming ones, including my next novel, The Kirklyn Horror, and a new Chadhiyana project for 2020.

If you don’t know, I’ve been working with other artists on five issues containing 9 new Chadhiyana stories that I’ve written (I’m doing some of the art too). Also an additional short will post on chadhiyana.com on 27 October in preparation for the new series. So, no I didn’t just put her on my banner again because I felt like it. Chadhiyana is returning, and this time under Dark Fire Press. (Though I will still finish the In the Company of Shadows arc in due time.)

You can also follow me on social media for my current Inktober theme: Lovecraftian Horrors ($5+ on my Patreon this month gets your name in the published Inktober collection I’ll put out in November). New Gentleman Cthulhu comics have continued to post on gentlemancthulhu.com, and I’ve been in talks with a few other authors who wish to be published under Dark Fire Press.

So its been an exciting year so far, and very busy. Hopefully you’ve been keeping up, but if not, there it all is.

If you’re going to any of the above shows, again look for the new banner. If not, visit Dark Fire Press’s site for my books (I also added new links in the top menu of this site for Books & Comics and Merchandise, respectively). I’m doing everything I can to make my work more findable online (so far it’s working), so if you can’t find me at a show, you can at least pick up my new work somehow.

Stay tuned for more, and hopefully I’ll see some of you in Baltimore, New York, or Providence. Cheers!