From 7 October – 8 November 2021, I’m running a Kickstarter Campaign for Chadhiyana, my dark fantasy comic series, all while travelling around the East Coast for conventions. 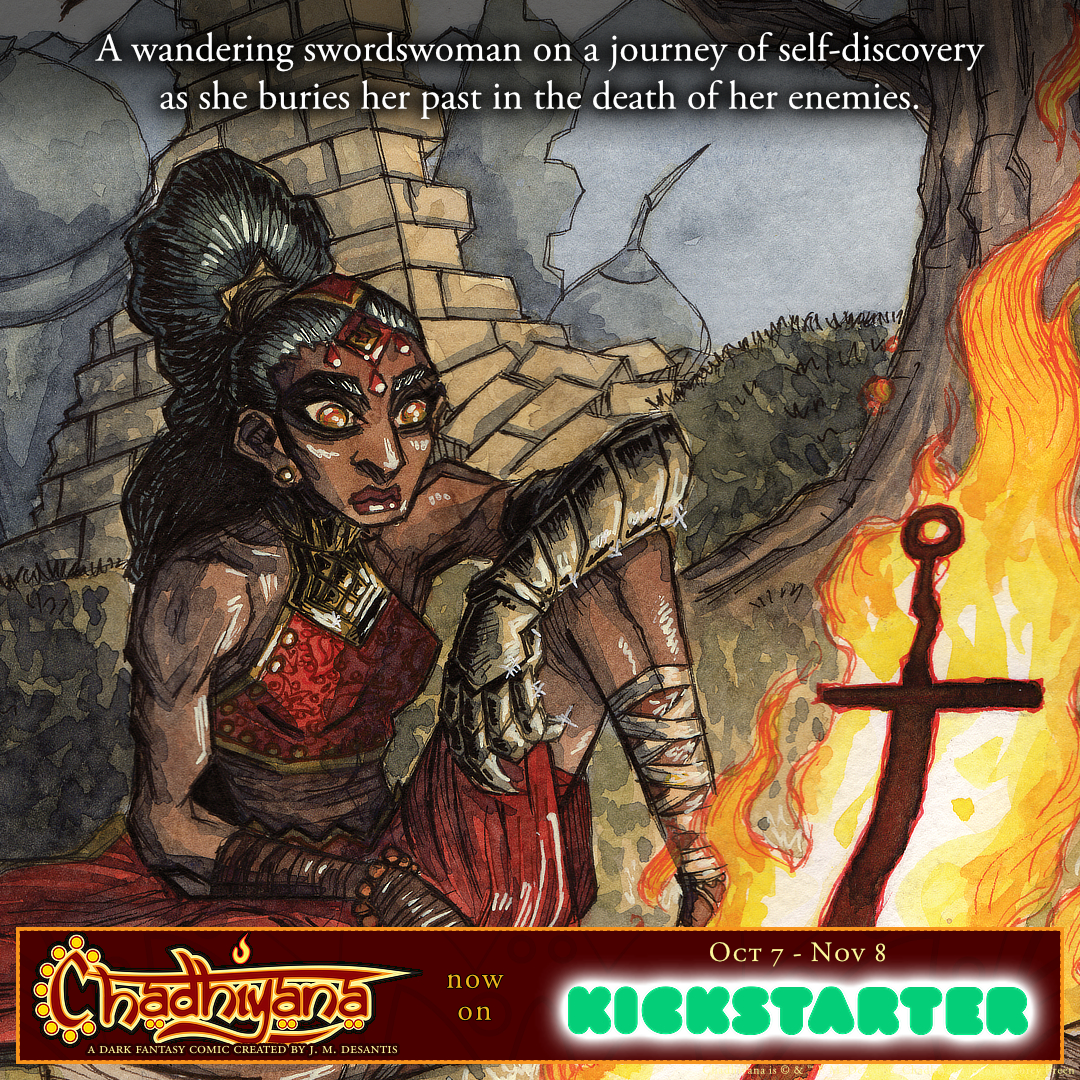 I’ve had so much going on in all directions (new books, upcoming projects, publishing as Dark Fire Press, interviews, conventions, etc) that it’s worth writing a single blog post that puts all the information out in one place. That’s exactly what this post is, and I may as well start with my new banner artwork as I return to exhibiting at conventions this week.  END_OF_DOCUMENT_TOKEN_TO_BE_REPLACED

The votes are in for my Inktober 2019 theme! However, before I begin, I have to give a heartfelt thank you to all of the fans and staff at the Baltimore Comic-Con this weekend for helping make this yet another successful year. As I said last week, I’ll be cutting down on (and essentially taking off from) conventions for a year or so, unless I’m a guest, such as at the No Such Con in the winter. Yet the response to my work was so warm, I couldn’t help but make an exception for Baltimore.  END_OF_DOCUMENT_TOKEN_TO_BE_REPLACED

I’ve been absent a while (at least on this blog), but not gone entirely. There are a few things I’ve had to attend to personally and a number of things developing behind the scenes (which my Patreon supporters had a full update about yesterday). But there’s no time to lose on explanations. Baltimore Comic-Con is nigh (I’ll be there all three days), Inktober lurks around the corner, and NaNoWriMo looms in the distance.  END_OF_DOCUMENT_TOKEN_TO_BE_REPLACED

Let me start by writing, I had a blast at New York Comic Con this year. Although parts of it were disappointing, to say the least (Saturday was surprisingly dead, and my worst Saturday on record, despite the show being a success overall), hanging out behind the table with Chris Campana was a lot of fun. So first, thanks to Chris for making it an enjoyable show, and for bouncing ideas and talking shop. That’s the sort of thing you just can’t put a price tag on at a show. END_OF_DOCUMENT_TOKEN_TO_BE_REPLACED

October is going to be an exciting month. This weekend I’ll be making my eighth (?) consecutive appearance at the New York Comic Con (this Thursday through Sunday) in my usual spot these past three or four years: booth 1259 in Small Press. Plus, I’ll have a special guest with me at the show. But even before that, if you follow me on social media (and if not, follow me now), you’ll know that I’ve decided to participate in Inktober this year (that is, wherein artists post an inked drawing a day through the month of October).  END_OF_DOCUMENT_TOKEN_TO_BE_REPLACED

Baltimore and the Shadow of NYCC

Well, I’m back two days from Baltimore and back in the studio to do all the catching up I’m seriously in need of doing. The wonderful news is, save for a few inquiries, my delays and silence have gone mostly unnoticed (most of my colleagues, at least, perceive that I’ve been busy of late), but of course that doesn’t change that I’ve been seriously unfair to my fans (especially my Chadhiyana fans) for months now. As I’ve written in previous posts, I’m working to change that—it’s just going to take a bit of time to work my way out of the back log of work I have to catch up on. That said, however, Baltimore Comic-Con was a success, and though I stayed away from social media for the most part during the show, I was fairly busy round the clock.  END_OF_DOCUMENT_TOKEN_TO_BE_REPLACED

See You in Baltimore This Weekend

Another year and another Baltimore Comic-Con. It’s one of the shows I’ve done for the longest length of time (in, I believe, about eight years of exhibiting at conventions—since the Fall of 2009), and it’s one of my favourites. Baltimore is extremely artist friendly (just look at the size of its Artist Alley), and I’ve always found the show to be well run and the staff quite friendly (though, admittedly, I’ve never been to a show where the latter wasn’t true). END_OF_DOCUMENT_TOKEN_TO_BE_REPLACED

Apologies for My Silence

I realise it’s seemingly been a while since there was any word from me (again), both on my websites and on social media. I can assure you this absence was not planned (unlike the time I took off in the summer to recharge and reevaluate things), nor was the length of it premeditated. Rather, I was without internet access in my studio for a full two weeks—something I thought was originally only going to be a few days.

I won’t get into specifics (I still like to keep some privacy in my life), but it’s worth noting I’m back online and just in time, as there’s a new Gentleman Cthulhu collection to release, a sketchbook to finish up and print, Chadhiyana to return to, and two conventions coming up in the next three weeks. END_OF_DOCUMENT_TOKEN_TO_BE_REPLACED