Patreon in March & Some New Swag

For a long time now I’ve been talking about, debating and even writing about starting up a Patreon page. To be perfectly honest, I’ve been working on one for a while now (and have mentioned it a few times on this blog), but I’m beginning to tire of simply working on it and not putting the plan into full action. At this point nearly everything is complete for the page, and so I’m making the official announcement now that my Patreon page will launch on March 1, 2017. END_OF_DOCUMENT_TOKEN_TO_BE_REPLACED

2017 is already off to a roaring start. Over the past two weeks two of my comics, Chadhiyana #5 and Gentleman Cthulhu: Year One, were released online (the former by Rosarium Publishing). Then there’s the US Presidential Inauguration and everything happening around it (such as the Women’s March on Saturday). Even with all of that, this is something of an in between week for me. One of those weeks where I’ve been so busy with work, and so many gears are turning and plans are in motion, but there’s nothing official to announce. So I thought I’d take the time this week to just write a few updates and maybe (maybe) hint at a few things to come. END_OF_DOCUMENT_TOKEN_TO_BE_REPLACED 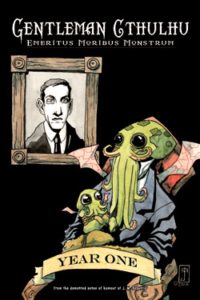 As with Chadhiyana #0 (which I self-published in 2012), Gentleman Cthulhu: Year One is available in both digital and print formats on IndyPlanet. Though originally my thought was to collect only the first year until a significant collection could be made (that is, enough comics to fill a square-bound trade), I’m planning now to release a collection every year. So, if you really love the web-comic, you’ll have these comics every year to look forward to and collect. Of course, for those who wish to continue to read them online, all of the comics will remain free on the website for your enjoyment. END_OF_DOCUMENT_TOKEN_TO_BE_REPLACED

In the past month I’ve spend a decent amount of time (on my blog on jmdesantis.com) highlighting my online store (through Zazzle.com) though I haven’t taken the time to highlight the fact that more than one third of the roughly 100 items available on the store feature artwork from Gentleman Cthulhu–including three designs featuring the tentacled gentleman himself. More, as promised, Gentleman Cthulhu: Year One (the collection of the first year of GC comics which sold out at this year’s New York Comic Con) is finally going to be available to order online! END_OF_DOCUMENT_TOKEN_TO_BE_REPLACED

It’s officially thirteen days until Halloween, and though that means the holiday falls on a Monday this year (as this blog posts on Tuesdays), I plan to enjoy Halloween in every way possible. I have my usual stock of horror flicks, I always indulge in reading some horror fiction (though that’s not to say I reserve all horror-related reading and viewing for October exclusively), and hopefully I’ll get out to a haunted walkthrough or two. And in the spirit of the season I’m trying to make the latest of my horror-related art available through my online stores. END_OF_DOCUMENT_TOKEN_TO_BE_REPLACED

Yet another New York Comic Con has come and gone (my eighth appearance at the show, in fact!). I got some major feedback and compliments from some of my Chadhiyana fans (who are apparently more passionate about the series than I had previously known). Also, my latest publication, Gentleman Cthulhu: Year One (a collection of the first 52 comics from gentlemancthulhu.com) completely sold out by mid-day Saturday. The only downside was that on Sunday I began experiencing considerable stomach pains (likely my diverticulitis acting up, with which I was diagnosed about this time last year), but I did my best to smile through the pain, and I’m doing okay now after a day’s rest. END_OF_DOCUMENT_TOKEN_TO_BE_REPLACED