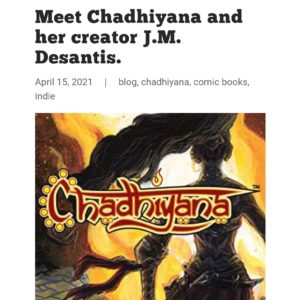 I recently sat down for an interview with fellow Dark Fire Press writer and creator, Jorge Medina (Wonder Duck) about the latest Chadhiyana: Rekindled comic and issues to follow it in this latest series. If I can be so bold as to say it, I feel this interview was so well conducted (and I’m really happy with how concisely I answered the questions), so please give it a read.  END_OF_DOCUMENT_TOKEN_TO_BE_REPLACED

Yet another New York Comic Con has come and gone (my eighth appearance at the show, in fact!). I got some major feedback and compliments from some of my Chadhiyana fans (who are apparently more passionate about the series than I had previously known). Also, my latest publication, Gentleman Cthulhu: Year One (a collection of the first 52 comics from gentlemancthulhu.com) completely sold out by mid-day Saturday. The only downside was that on Sunday I began experiencing considerable stomach pains (likely my diverticulitis acting up, with which I was diagnosed about this time last year), but I did my best to smile through the pain, and I’m doing okay now after a day’s rest. END_OF_DOCUMENT_TOKEN_TO_BE_REPLACED

I had a wonderful time at this past Saturday’s Inbeon Con. It was held in a great location (and I hope this continues for some time) and was well organised. Never mind that since my friend, Eric Hutchison, holds the con every year, it was great to see him and his family (including their new addition) as well as some other friends of mine who attended and exhibited at the show. Plus, these cons are helping me through the grief of my office buddy’s passing. They’re getting me out of the office while still allowing me to connect with my writing and art. It’s been an unexpected but welcome form of therapy in this difficult time (and thank you everyone who offered their condolences). Though perhaps what struck me most about this show (and the week leading up to it) is how many people have (sympathetically) approached me about my blog post about the previous week’s Newark Comic Con. END_OF_DOCUMENT_TOKEN_TO_BE_REPLACED

Like a lot of shows I’ve been doing this year, Inbeon Con was much smaller than shows like New York Comic Con (well, really, what show isn’t smaller than NYCC?) or even Boston Comic Con. Though, I’m finding sometimes the smaller shows turn out to be a bigger success than the larger ones, especially one day shows as they tend to be the most intimate between the attendees and the exhibitors and there’s less competition at the show. END_OF_DOCUMENT_TOKEN_TO_BE_REPLACED

As a child growing up in New Jersey, the Mennen Arena was this vaguely referred to place where the WWE (then the WWF) would occasionally hold a house show. I never went there as a kid, but somehow I never forgot the name. So when the opportunity came up to attend an event there this past weekend, the little kid in me got just a little curious again. However, it wasn’t Bret Hart or Shawn Michaels headlining the event but rather names like Greg Hildebrant, Neal Adams, Mark McKenna and yours truly, J. M. DeSantis (well, maybe I’m not a headliner yet, but I’m hoping my time will come). END_OF_DOCUMENT_TOKEN_TO_BE_REPLACED

Though it was something of a mixed experience, I enjoyed this past weekend’s East Coast ComiCon. As usual, I was able to introduce new people to my work–especially Chadhiyana–and see a few repeat customers, as well. Though more than that, it was nice to finally attend a convention so close to home, and (somewhat surprisingly) see so many of my peers and friends, many of whom are based out of New York and Long Island. Conventions are often the only chance I get to catch up properly with other creators, and as it is, I haven’t exhibited for about six months.  END_OF_DOCUMENT_TOKEN_TO_BE_REPLACED