I had a wonderful time at this past Saturday’s Inbeon Con. It was held in a great location (and I hope this continues for some time) and was well organised. Never mind that since my friend, Eric Hutchison, holds the con every year, it was great to see him and his family (including their new addition) as well as some other friends of mine who attended and exhibited at the show. Plus, these cons are helping me through the grief of my office buddy’s passing. They’re getting me out of the office while still allowing me to connect with my writing and art. It’s been an unexpected but welcome form of therapy in this difficult time (and thank you everyone who offered their condolences). Though perhaps what struck me most about this show (and the week leading up to it) is how many people have (sympathetically) approached me about my blog post about the previous week’s Newark Comic Con.

While I honestly don’t want to harp on an experience I’m hoping to forget, I’m amazed at how far the news (as it were) has carried. More, I’ve had even a few exhibitors and performers from the show apologise for my experience–though unsurprisingly, not the promoter from the show–and even one attendee reach out about her concerns that such bad press might hurt Newark’s growing art and comics community in general. That said, I suppose it is worth noting (for anyone who misunderstood), my sole issue is with the promoter of the show. I hold no one else responsible. It’s no reflection on the fans, Newark or my fellow exhibitors and performers what happened there. Honestly. The attendees were very supportive and friendly, and my fellow exhibitors were great.

Also worth mentioning, I feel the con failed all of the exhibitors and (in turn) the attendees. So, whilst I took the time to write an entire blog piece about the show which may or may not have (in part) spread the news about how disorganised (to put it lightly) the con was, there were many other exhibitors who had it worse than I did. It’s my honest belief that, Mark D. Boulding owed it to the entire list of exhibitors and performers to make things right.

I would add that in writing my blog piece I expected nothing in return. I merely meant to make good on my parting-word promise to Mr. Boulding that I would let everyone I knew know about how the show went, since he was so ungracious to me. And of course, by Monday morning I was still mad, after sleeping on it for two days. Again, I don’t want to dwell on that particular blog piece, though if anyone does want to discuss or comment on it, please feel free.

Conversely, and as may be clear already from the above, Inbeon Con was quite the opposite experience (minus the attendees and exhibitors which were great at both events). I had the chance to see a few friends who I haven’t bumped into at the last few cons I’ve done (in some cases, not since East Coast ComiCon back in April), including Jorge Medina and Jonathan Syphax of MAS Studios, Mark Mazz, Matt Kelly and the guys at Fat Guy Inc (Brendan Shaw and Peat Vazquez). Though perhaps most enjoyable were the lengthy conversations Jorge and I were having, mostly about writing, storytelling and the comics industry in general. So thanks for stopping by the table so much, Jorge. It was a great time. 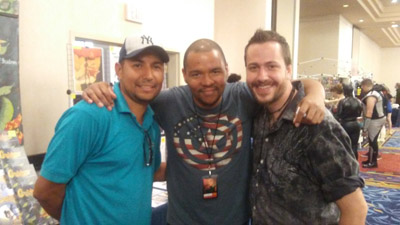 It also seemed there was increased interest in Chadhiyana again at this show. I’m hoping this trend continues, as I’m looking to have more books on the table for future shows (both Chadhiyana and others–the first Chadhiyana trade is due out in early 2017). More, I’m hoping my art print sales continue to go steadily well. As it is, I have some ideas for new prints I’d like to make available, as well as perhaps a new sketchbook in the future, but I’ve got to move just a few more items before I can.

Let’s see what this weekend brings, as I’ll be completing my four-week-in-a-row convention stint with my return to the Baltimore Comic-Con (I was unable to make last year’s show for the first time in four years). I’m looking forward to it, and I hope to see a bunch of you come out this weekend.