I’m happy to report that everything about this past weekend reminded me why I enjoy doing the Baltimore Comic-Con so much. The attendees are warm and supportive, my fellow professionals are in great spirits and easily approachable and the entire event is insanely well run (and for its size, that’s an accomplishment). I was glad I had the chance to meet the show’s promoter, Chris McClelland, and compliment him on the show personally when I submitted my application for next year (that’s right, I’m already scheduled to return in 2017). It was a joy to come back and thanks to everyone who helped make that possible.

As can be imagined, it was a fairly eventful show for me. Two of my prints sold out, making room for new artwork I’m currently developing and a number of people picked up both Chadhiyana issues and expressed interest in Gentleman Cthulhu. I only wish still that I had the collection (of the latter) prepared for this show. There was a surprising response to my work this year (I say surprising because I hadn’t attended last year), and that, for a creator, always feels good. 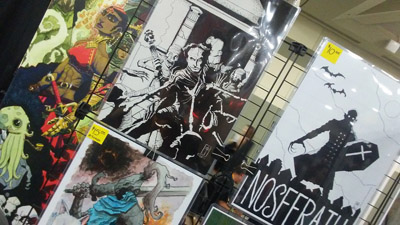 Of course, as always, it was good to see some familiar faces and meet some new people. I hadn’t run into Hector Rodriguez and K. J. Murphey (of GWP) in some time, and it was great chatting it up with them, as well as Ryan Browne, of ZombiePETZ fame. I was also fortunate to be right next to Chris Campana, who I first met years ago in Boston. Thanks to Chris for all the great conversation, the advice and insights into a few things (as well as allowing me to add my own experiences into the very informative conversations he was having with some of his fans–which I appreciate). 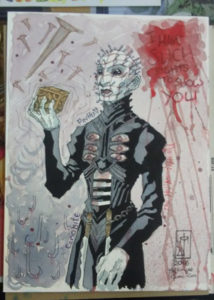 Also near me was Michael Watkins, whom I met for the first time and who made the show much more enjoyable with his amiable personality. Likewise to Sean von Gorman, who is always good to bump into. Thanks to Neal Adams for taking the time to offer informative and help advice again (and for the “any time” offer). I appreciate it from such an industry giant, immensely. And last, but certainly not least, to Bill Campbell and fellow Rosarian Bizhan Khodabandeh (Little Red Fish) who kept me company for much of Saturday, including for dinner. Thanks guys. I had a great time.

Other than that, one of my favourite parts of the convention was meeting a man named Scott McLean who, on the first day of the show, spoke to me at length about some new things happening with one of my favourite characters of all time: Vampire Hunter D–and I literally got chills (which, as I get older, don’t happen so often as they used). By and large, I’m probably looking forward to Vampire Hunter D: Message from Mars more than the next George R. R. Martin book, so I’m glad I happened by the Stranger Comics booth as I was unsuccessfully searching for Mr. von Gorman (who found me later).

I don’t want to say too much, as I don’t know how much information about it is out there, but…oh! What the hell! A five issue comic based on a Hideyuki Kikuchi story that has never been published in English (and sounds amazing based on McLean’s teaser-pitch), plus an in-development VHD television series. And they have plans to adapt more stories into comic form (and I can tell you by seeing the first five pages of Message from Mars this thing looks amazing!). Finally, besides the translated novels, I might actually be able to get my VHD fix again! (No, I don’t geek out like this often.) 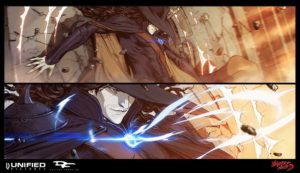 So, to put it briefly, I had a blast this past weekend, and again, thank you to everyone who had a part in that, large or small. I’m probably forgetting people (like Dwayne Farver a fan who every year has asked me for a commission–even last year when I couldn’t make the show), and I apologise for that. I’m already looking forward to returning next year and hopefully for many years after it.

For now, it’s back to the teaching post (as school starts this week for me) and the studio, but keep your eyes peeled. I have a few surprises coming as we make our way to NYCC in October.