I just wanted to quickly take the time to thank the Odenton Library for inviting myself and my other Rosarium Publishing compatriots to the AAPCL (Anne Arundel County Public Library) Comic Con this past Saturday (and my thanks too to Bill Campbell for asking me to be a part of Rosarium’s presence there). It was a small show, but sometimes those are the most fun and relaxing. Plus, I always enjoy speaking on panels, and as per the encouragement of my publisher, I’m trying to speak on more of them going forward. END_OF_DOCUMENT_TOKEN_TO_BE_REPLACED

Just a brief reminder that I’m speaking on a panel with other members of Rosarium Publishing at the AAPCL (Anne Arundel Public County Library) Comic Con this Saturday. The panel is called Diversity in Children’s Comics and will also feature Micheline Hess (Malice in Ovenland) and Bizhan Khodabanden (The Little Black Fish), and it will be moderated by none other than Rosarium Publishing’s fearless leader (and writer of the recent viral–though long-ago-written–letter to DC Comics about diversity), Bill Campbell. END_OF_DOCUMENT_TOKEN_TO_BE_REPLACED

Yet another New York Comic Con has come and gone (my eighth appearance at the show, in fact!). I got some major feedback and compliments from some of my Chadhiyana fans (who are apparently more passionate about the series than I had previously known). Also, my latest publication, Gentleman Cthulhu: Year One (a collection of the first 52 comics from gentlemancthulhu.com) completely sold out by mid-day Saturday. The only downside was that on Sunday I began experiencing considerable stomach pains (likely my diverticulitis acting up, with which I was diagnosed about this time last year), but I did my best to smile through the pain, and I’m doing okay now after a day’s rest. END_OF_DOCUMENT_TOKEN_TO_BE_REPLACED

END_OF_DOCUMENT_TOKEN_TO_BE_REPLACED 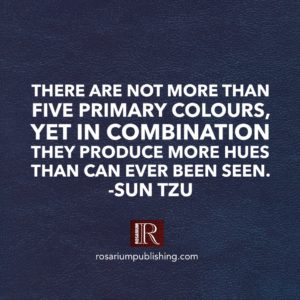 Today is a very special day for me and Chadhiyana (my medieval Indian assassin comic). Not only has Chadhiyana #4 been given a release date of April 27th, but Rosarium Publishing (Chadhiyana’s publisher) has launched a massive crowdfunding campaign in order to reach the next level in its growth as a publisher: indiegogo.com/projects/rosarium-publishing-the-next-level (appropriately named Rosarium Publishing: The Next Level). END_OF_DOCUMENT_TOKEN_TO_BE_REPLACED

2015 has been a landmark year! I don’t want to sound like I’m bragging, but I can’t help the truth of it. There have been some amazing things that happened this year, some of which I’ve been wanting or working toward for a good portion of my adult life (some since I was a kid, even). From getting a publisher, to moving into a new place and even winding up in the hospital at one point, 2015 was filled with incredible ups and downs. So pull up a comfortable chair and pour a glass of eggnog. It’s time for my annual reflections on the year past. END_OF_DOCUMENT_TOKEN_TO_BE_REPLACED

The end of the year is fast approaching, and typically the last three weeks are planned out for an end-of-year reflection post, a Happy Holidays post, and a Happy New Years post (in that order). So that leaves this week as the last week of the year for any topic I choose, and I haven’t put out any information on the state or release of Chadhiyana #3. I don’t have any official news yet, but I will give you all a bit of something, rather than remaining silent until the first full week in January. END_OF_DOCUMENT_TOKEN_TO_BE_REPLACED

I could not think of a more appropriate title for today’s blog post. After all, I’ve kept many of you in suspense for months with claims of forthcoming “big news”. Some of you have even reached out to me saying you could barely take another teasing statement about it. If it’s become unbearable, I do apologise; things took longer than expected (as they often do). That said, you can breathe easy at last because today is the day. Here is what you have been waiting for. END_OF_DOCUMENT_TOKEN_TO_BE_REPLACED