Yet another New York Comic Con has come and gone (my eighth appearance at the show, in fact!). I got some major feedback and compliments from some of my Chadhiyana fans (who are apparently more passionate about the series than I had previously known). Also, my latest publication, Gentleman Cthulhu: Year One (a collection of the first 52 comics from gentlemancthulhu.com) completely sold out by mid-day Saturday. The only downside was that on Sunday I began experiencing considerable stomach pains (likely my diverticulitis acting up, with which I was diagnosed about this time last year), but I did my best to smile through the pain, and I’m doing okay now after a day’s rest.

Perhaps my favourite part of the con were the Chadhiyana fans. After all, it’s my main project and the one closest to my heart. Quite a few people were asking for the latest issues in printed form (unfortunately, only issues 0 and 1 are 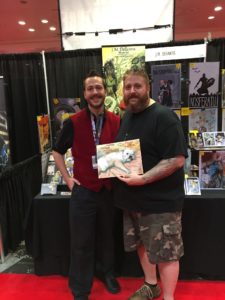 in print–issues 2, 3, 4 and beyond are and will be digital releases until the collected trades, under Rosarium Publishing). One woman in particular told me that “Chadhiyana is [her] favourite indie comic,” and I learned that another long time fan of my work is such a fan of Chadhiyana that she inquired not only about the latest issues, but also the inspirations behind Chadhiyana (which she had previously done her best to research) and is interested Chadhiyana commissions (shout out to you Gabrielle Mack). I even found out a friend of mine has been reading the series and getting it (I mean, really getting it).

I know I’m bragging just a bit, but I had no idea I had fans who were so thoughtful and inquisitive. I was glad to get the feedback and more so since I could not be more apologetic for the delay between issues 4 and 5 (the latter of which is still forthcoming, but is in to the publisher).

The experience made me aware too that I need to be more communicative with my Chadhiyana fans. Fortunately that’s in keeping with the initiatives I’m hoping to take over the coming months, though it is admittedly difficult to know what to say when you don’t have one hundred percent control over when issues come out. I do hope my fans will forgive me that, and Rosarium Publishing. They’re a great publisher to have, but still a very small operation, so sometimes things don’t move as quickly as I’m sure we’d all like. But because I’m just beginning to see that there are so many really passionate fans, I’m going to see what I can do on my end to give you more Chadhiyana, even when an issue is being delayed publication (though hopefully that will stop being in issue in and of itself). 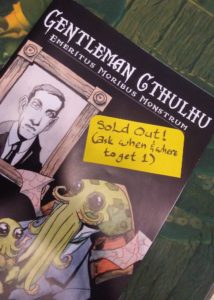 Of course, selling out of Gentleman Cthulhu was another wonderful surprise for me. I wasn’t sure how it would go, and was kicking myself for not ordering at least double the amount of books for the show. I suppose I’ll just have to be sure not to make the same mistake again. All the same, I’m happy the tentacle-moustached Old One is getting a few more laughs from both new and old fans of this bizarre little idea I had.

As for the people who helped make the show a success (besides my fans, of course), thanks especially to my parents and my girlfriend for watching the booth for a bit when I joined my publisher for his after-panel meet up, and when I needed a break. Also, thanks to fellow Rosarians Micheline Hess, Keith Miller, John Jennings and our fearless leader, Bill Campbell, for hanging out for a bit. Again, we have to do it more often. Neighbors Keith J. Murphey, John Escobales, Hector Rodriguez, Alex Rivera, Emilio Rodriguez and Chris Duckett. My fellow artists and writers at the show, Eric Hutchison (Inbeon Studios–not to mention his continued amazing job making my art prints), the MAS Media crew, Jorge Medina, Jonathan Syphax and Anibal Arroyo, Mr. Mark Mazz, Matt Kelly and the guys at Fat Guy Inc, Brendan Shaw and Peat Vazquez (especially for the long conversations in the morning, and Brendan, for asking me do to one of my “fine art” commissions of his dog, Dexter–I was honoured you did).

Also, David Cebollero for the continued support and Daniel Hort for the always enjoyable conversation and also the feedback and encouragement. To everyone (even if I forgot you here), it was a pleasure. Also for the fellows at Stranger Comics (the only booth I got to all weekend) for talking Niobe and Vampire Hunter D (the latter of which I’d been waiting for since the Baltimore Comic-Con). As I’ve said, one of the main reasons I do conventions is to be around like-minded people, both exhibitors and attendees, and just a few good conversations and laughs can make a convention worthwhile for me.

That said, with the con over, I’ll probably take my usual respite from the con circuit until the Spring, but I’ll be hard at work writing and arting in the meantime. If you haven’t gotten a chance yet, please join my mailing list (especially if you’d still like a copy of Gentleman Cthulhu: Year One), and for those who read this blog (also finding out it’s more people than I expected) I’ll see you next week.