As I’ve written before this year, I may be writing less blog pieces and took a break from shows, but there’s a lot happening behind the scenes (as the publications of Robert Phillips and J. M. DeSantis: The First Ten Years should already prove). But we’re nearing the end of the summer, and with the Fall comes my planned return to public appearances and shows, and just in time for that I was asked to take part in a local author event at Barnes & Noble, as well as to do a second interview with Sequential Tart. And then there are some new web-developments on the horizon, including this site and Gentleman Cthulhu.

First, I was approached again by Sheena McNeil of Sequential Tart to do a half-serious, half-funny interview for the site.

Sheena had formerly interviewed me about the Chadhiyana series a few years back (link to that in the present interview). This time we spoke not only about the upcoming new Chadhiyana project, but Gentleman Cthulhu, my reading and television-watching habits, classic movie monsters, and my latest publication, Robert Phillips. 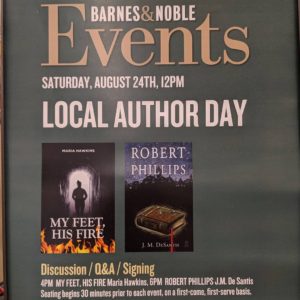 Robert Phillips, my Lovecraftian horror novella, is also going to be the subject of my first book signing and Q&A taking place on Saturday, 24 August at 6:00 pm at the Barnes & Noble in Princeton, New Jersey. This appearance is part of the store’s local author event, and I will be one of four authors appearing at this event, all of us promoting works of different genres. More information for the event can be found at: stores.barnesandnoble.com/event/9780062056565-0.

With that, I’ve just got a few other odds and ends. Most importantly, Gentleman Cthulhu will be starting up again with regular weekly publications on the 20th next week (H. P. Lovecraft’s birthday). Like Chadhiyana, I apparently needed a break from the old boy for a while, but I’m going to finish up the comics for what would have been year three, and start with new artwork (including for Gentleman Cthulhu—which my Patreon supporters have already seen) for the new comics going forward. So for my Gentleman Cthulhu fans, there is that.

I’m also going to point out that the layout of this site has changed quite a bit. Most noticeable perhaps is that I’ve widened the layout, as this site for some reason remained narrow while my other sites (chadhiyana.com, gentlemancthulhu.com, etc) had this wider layout. With that, I’m re-adding links to my online stores on the side bar, and I’ll be slowly adding links to my publications on the individual pages such as the WRITING and ART sections.

One of the things I’ve noticed over the years is that, other than conventions, most of my fans and even friends can’t always find my work. I never wanted this site to be a massive advertisement for my work, mostly because it was originally set up as a portfolio site for editors to look through. But I suppose that’s long changed, and the majority of people coming to my site are new and old fans. So with more work (and more substantial work, at that) becoming available online, I’m going to add more prominent links on where to find it, including the “LATEST” section in the sidebar. I think that will remain and always list my two latest publications.

Anyway, I don’t want this to get too long, but there is a question about Chadhiyana I have up on my Patreon which anyone can submit an answer to: patreon.com/posts/question-about-29136201. I’d love to hear what people think, and not just from my current patrons.

That about does it for now. I’ll return with more soon. Cheers!