When I think of a typical comic convention, my experiences at No Such Con are not what come to mind. The show took place at a college, it was run by students and I was given a half table and paired with a musician and sometimes actor on said table. It sounds terrible, I know. But if that’s the way you think this blog piece is headed, you could not be more wrong.

I had a great time at No Such Con, and more it was impressive how smooth the show ran, especially because the entire show is run by students at Vassar College. Honestly, I’ve been to conventions run by professional promoters which were not nearly this well done (and if you’ve read my reactions to the Newark Comic Con 2016, you know a truer statement was never made). Add to that the show has been going strong for at least twelve years. Considering there’s a turnover of students every four years (give or take a year), it’s truly remarkable this show comes together at all. So, really, congratulations are in order to the members of the No Such Organization.

I was flattered they invited me to the show and to speak on so many panels. As I’d written in previous blog posts, this was the first time I was invited as a guest to a show and the first time I was given a solo panel, never mind two (on web-comics and managing your creative time). I was given positive feedback on both, and it was also good to know I could hold the attention of an audience for a full panel by myself. More, I’m glad I was able to try this out at a smaller show first. I really appreciate the opportunity. (Again, thanks NSO.)

Also, my thanks to author Thomm Quackenbush for moderating the artists and writers panels so well and for having me on them. They were a lot of fun, and if you weren’t at the show or missed them, they were recorded. Once Mr. Quackenbush has them up on his site, I’ll share them in a follow-up blog post. 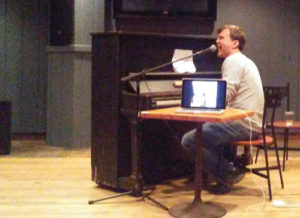 As for my table-mate, the famous (some might say infamous) and most prolific songwriter in history, Matt Farley, it was a pleasure to share the spotlight with him for the weekend (he’s appeared on The Tonight Show, after all). We had a good time chatting and laughing throughout the weekend, and I had the chance to sit in on and enjoy one of his two performances of the weekend (They Thought I was a Narc at the Hippie Attic is still playing on repeat in my head). I also met Mr. Farley’s film collaborator and director, Charles Roxburgh, and got copies of their fun, campy films Don’t Let the Riverbeast Get You and Slingshot Cops (I’ve already watched the former–expect a review in the coming weeks).

Of course, I do wish the crowds were a little larger, but that’s hardly a gripe. I had such a great time and the opportunities were so appreciated, it really didn’t matter. More, even though I only had a half a table to work with (something I’ve only done once before and with disappointing results, to say the least), I was impressed that I was able to make my display work and happy it worked out so well.

Really, the only disappointing thing is that I don’t have enough space to write about the show in more depth (without descending into a very wordy write up that few would probably take the time to read). And I want people to read this one, because it was a great, great show. 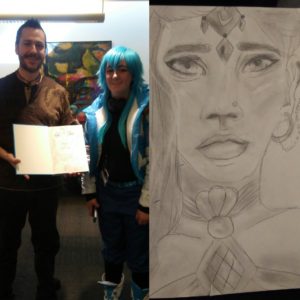 So, thank you again to the NSO at Vassar College for having me, to my table-mate, Matt Farley, to my neighboring creators, and to the attendees who showed their support and came to my panels (including two fans who made the trip up special to see me). Ana special thank you to the attendee who honoured me with my very first piece of Chadhiyana fan art. You alone could have made the whole weekend worth it.

Expect a brief follow up piece with the artists and writers panels in the coming days, and don’t forget I’m finally launching my Patreon page in just a week’s time! See you then.

Back to Top | No Comments
Tags: Chadhiyana, Charles Roxburgh, comic convention, convention, Don't Let the Riverbeast Get You, fan art, Jimmy Fallon, Matt Farley, Newark Comic Con, No Such Con, No Such Organization, panel, Slingshot Cops, The Tonight Show, They Thought I was a Narc at the Hippie Attic, Thomm Quackenbush, Vassar College
Cancel Reply