Let me start by saying that the biggest problem with Netflix’s newest series based on the popular Konami video games is simply that it’s too short. Four episodes, each running just over twenty minutes is more like an appetizer than a full meal–especially for the binge-watching viewership that Netflix helped to create. It’s essentially a single feature film that ends just when the story is about to get started (likely because there are another eight episodes yet to be released). But perhaps that’s a strong point of the show as well, because like a vampire whose finally feasting on blood after a hundred years (sorry, I had to), it leaves you wanting so much more.

The show was all the more satisfying for me because I did have some initial misgivings about how Netflix would handle a Castlevania adaptation–or how anyone would handle it really (it’s hard being a Castlevania fan–you get burned so often). Video games are notorious for poor adaptations and with good reason. Complex stories or not, games are meant to be played and experienced, not watched. Fortunately, some of the older games from the Nintendo era had such a bare-bones premise (rather than a full-fledged story) they allow for plenty of expansion without destroying the source material–or at least one could hope; and this series succeeds to a large extent.

In particular, Netflix’s Castlevania is based on the third game in the series: Dracula’s Curse. The game features Trevor Belmont, a vampire hunter from the famed Belmont Clan who becomes the first to challenge, the infamous vampire lord, Dracula who has placed a curse upon Wallachia and sent legions of creatures to ravage the land. Along his quest, Trevor can recruit the help of three companions including Dracula’s own half-vampire son, Alucard.

As far as the show is concerned, it follows the premise pretty faithfully, whilst adding in a few additional bits inspired no doubt from Castlevania: Symphony of the Night (which focused more directly on Alucard), and some of its own flavour. Dracula, Alucard, Alucard’s mother (Lisa), Trevor and Sypha Belnades (one of Trevor’s companions) are all present. Only absent is Grant Danasty, who I hope will appear later in the series. And the casting was well done, which includes two alumni from The Hobbit films: Richard Armitage as Trevor and Graham McTavish as Dracula. 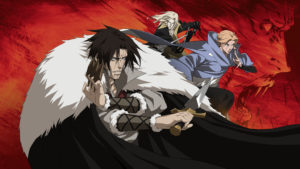 To its credit, the animation is well done, and bloody as hell in the action bits (as promised by the show’s creators). I particularly like sequence in which Trevor whipped one of his enemies in the face and…well, I won’t spoil anything for you. Plus, sequences like the Cyclops fight are nice subtle nods to fans of the games, and don’t come off as being forced or cheesy. All of it mixes together for possibly what the show’s producer Adi Shankar claimed: “the best fucking video game adaptation we’ve had to date.” Well, maybe not quite, but it certainly is pretty close (though nothing like Game of Thrones–another claim of Shankar’s).

Of course, I still stand by my initial thoughts that I would have rather seen a live-action Castlevania than an animated one, but the animation didn’t get in the way, so I’ll consider that a win. Otherwise, the only real trouble I was having was the timeline of things. As a Castlevania fan I’m used to things moving along decades and even centuries, but in the show there’s only a year between Dracula’s threat and the curse coming to fruition, and it’s in that same year that Trevor steps into the forefront of the story. I always had the impression that the curse had been around for many years before the Belmont Clan were finally hired to challenge Dracula. Perhaps Warren Ellis (the show’s writer) felt there might be nothing of Wallachia left by the time even a decade had passed? I suppose can’t fault him for that.

That said, even if you’re not a Castlevania fan, there’s much to enjoy here–providing you like medieval horror. Again, the only difficult part is having to wait for the remaining eight episodes, whenever Netflix decides to release them. Like the advent of Dracula’s curse in the show, it’ll probably be a year before the remainder of the story is released.

I won’t say I’m not a little skeptical (yes, again), because I did read somewhere that Ellis plans to deviate from the source material a bit more in the second two-thirds, but hopefully not to the detriment of everything so far. It was quite good and after this little taste, I’m a bit more confident that video games can be adapted successfully into film or television…providing the right people are behind it.