This weekend, you can find me in Artist Alley at the Boston Comic Con Friday, Saturday and Sunday. According the convention’s website (bostoncomiccon.com), my Artist Alley table is C722, and from the looks of things on the map it’s located slightly right of the exact center of the show (that is, right based on where the entrance is located). Of course, how that plays out in physical terms is entirely different, but it looks like a pretty nice spot. That said, and somewhat surprising even to me, Boston is going to be the first of four consecutive shows.

Next weekend, I’ll be staying a bit more local for the Newark Comic Con (which I heard great things about from a few of my artist friends who attended last year’s show). As for the following weekend, I was just asked to return to Inbeon Con in Long Island, NY. Then, it’s back to Baltimore after having taken year off from the show. So, the next month is going to be busy for me, and apparently not just in the studio, as I was already intending it would be. I’m pretty excited about it as I love doing shows, love travelling and (in the case of their respective shows in particular) love both Boston and Baltimore. 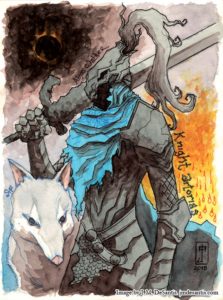 Though, for those attending this weekend’s show, I’m hoping to have a few new prints on the table (it all depends on whether or not I get the delivery in time for the show). If they do arrive in time, you can expect a few familiar Gentleman Cthulhu panels offered as mini-print (taking for granted you read the comic), as well as the Knight Artorias piece I created last year. I really love this one, and if you’re a Dark Souls fan like me, be sure to pick one up. These of course are added to my pre-exisiting catalogue of Chadhiyana and fan-art prints.

I’m also going to offer some new options for convention sketches. Namely, larger 11”x14” and 11”x17” sketches will now be available. I had only offered as large as 9”x12” before this, but I keep getting occasional requests for the bigger sizes. That said, it is slightly altering my pricing scale, as I’m trying to make something that is more uniform and logical (not that I didn’t have a logical pricing system before, but the business end of this writing and art thing, like the writing and art itself, is a constant work in progress). In fact, in some cases, certain sketch types are dropping slightly in price (great news for you)!

I’m also trying to get a few more prints and one other thing together for this half of the convention season, but I’m going to have to take that on as I can. I have to pace myself a bit, as there’s always on-going work to be done on Chadhiyana and Gentleman Cthulhu, and I have a few other outstanding commissions and projects to see to before the summer’s end. So let’s see what happens there.

In the meanwhile, be sure to check out this week’s Gentleman Cthulhu (gentlemancthulhu.com). It’s going to be in honour (as it were) of Boston and the Boston Comic Con. Though I’m hoping to run two this week in order to (finally) catch up on the weeks I fell behind. If that is the case, the second comic this week will be as aforementioned.

Hopefully I’ll see most of you at one or more of these upcoming shows. Cheers!

For more information about the Boston Comic Con, visit bostoncomiccon.com.