It’s a bitter sweet moment. On one hand I feel that all stories must have an ending, even when I wish they would never end–I’m not much for on-going series. On the other, the Soulsborne games (that is Demon’s Souls, Bloodborne and the Dark Souls series) have been a singular source of entertainment and inspiration for me for the past eight years. With the recent release of the final Dark Souls III DLC, The Ringed City, From Software has brought an end to the Dark Souls story and possibly an end to an era in gaming. END_OF_DOCUMENT_TOKEN_TO_BE_REPLACED

I understand that game play and design is a sort of broad topic to tackle with any game. Though in this particular context I mean as it pertains to the experience Dark Souls and the related titles of the Soulsborne series create. In truth, and with any well designed game, the way you play the game, the way you explore it is as essential to the player experience as the graphics and the story. In the best designed games, game play and design are the story. Because, after all, experience becomes story in the end, does it not?  END_OF_DOCUMENT_TOKEN_TO_BE_REPLACED

For anyone who is not a gamer (or game designer, for that matter), I’ve heard it said that the highest point in the art of game design, the greatest achievement a game can make, is to seamlessly integrate all of its parts into a complete experience for the player. Like reading a book or watching a film, you never once want the game to feel disjointed, a part of it forced or out of place; the suspension of disbelief should never be broken. And having been a gamer all of my life, and speaking as someone with a bit of amateur experience and classes in game design, I can honestly say I have never played a game or series which has achieved this so (near) perfectly. END_OF_DOCUMENT_TOKEN_TO_BE_REPLACED 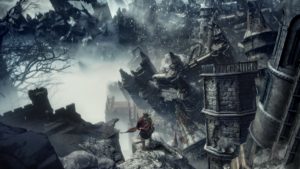 In twenty one days, the world of Dark Souls players will be able to explore The Ringed City, the final DLC in the series by From Software and perhaps at last we Undead will see the ultimate fading of the Flame. It’s a sad day and a hopeful one, I’m sure, for many of us who have been inexplicably drawn to the series since the first Dark Souls in 2011 (and even its predecessor, Demon’s Souls in 2009). But even for those who have slowly been brought into the fold over the years, the ending of Age of Fire spells the ending of an age in video games, one which hopefully will usher in a new age of great potential and creative freedom. Though for me, I wonder if this will spell the end my on-going love for video games, for, as many have said in the before me, Dark Souls ruined video games for me. END_OF_DOCUMENT_TOKEN_TO_BE_REPLACED

It’s October 25th. Halloween is a little less than a week away, my birthday is a little more than a week away and the first Dark Souls III DLC, Ashes of Ariandel, is available today for all the travelers of Lothric to discover and explore (I’m a huge fan of the SoulsBorne games, if you didn’t know). That said, one can expect I’ll be immersed in otherwise idle occupations for the next week or so, but that’s not to say I won’t be working on at least a few things, here and there. END_OF_DOCUMENT_TOKEN_TO_BE_REPLACED

It’s hard to believe that two months have passed since I stated I wanted to take some time in this blog to focus on writing about the Souls series from developer From Software. Of course, for those keeping up with my work and this site, the publisher for my comic Chadhiyana, Rosarium Publishing, ran a successful IndieGoGo campaign. That, coupled with some time for recovery (promoting it was the most aggressive I’ve ever been about promoting anything), threw off my schedule a bit. But now that things are stabalising, and since I’ve completed my first play through Dark Souls III (with my own creative work, I can’t put as much time as I’d like into gaming), I thought I’d begin this week by writing about my reactions thereof. END_OF_DOCUMENT_TOKEN_TO_BE_REPLACED

Though this past weekend Japanese gamers saw the release of Dark Souls III, we in the United States will not be getting it until April 12th. However, with this recent overseas release, an intriguing Dark Souls related article that was recently brought to my attention, and the fact that I finally finished my second play through Bloodborne (just one trophy away from my Platinum–yes, I play slowly, as I don’t have as much time to game as I’d like), I thought it would be a perfect time to write again about my anticipation for the next installment in the only game series in recent years (relatively) which has had a profound impact on me as a creator and storyteller. END_OF_DOCUMENT_TOKEN_TO_BE_REPLACED