I’m back! Well, that is to say, I never really left, but as stated in one of my previous blog pieces, I decided to take a little bit of an internet break following the Rosarium Publishing IndieGoGo campaign. It was taking a lot of my attention and energy, and I just needed a bit of time to recharge. Fortunately, the campaign was a success and there was a lot of support for Chadhiyana as well. I’m very much looking forward to the release of the first trade (in January). In the meanwhile, today’s blog is about a few things that might have been or were missed in the shadow of the campaign. 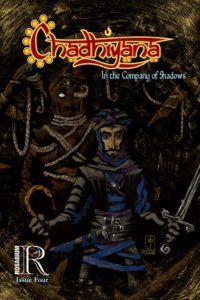 Though I did mention these in previous blog posts, there were a number of Chadhiyana comic releases during the Rosarium Publishing campaign. First, Chadhiyana #4 was released on April 27th (during the campaign), to a positive review from SequentialTart.com (spoiler warning: sequentialtart.com/reports.php?ID=9920&issue=2016-05-16). If you haven’t gotten the chance to order the issue yet, as with previous issues, it is available on both Amazon.com (amazon.com/Chadhiyana-Company-Shadows-J-M-DeSantis-ebook/dp/B01EBDKY34/) and comiXology (comixology.com/Chadhiyana-4/digital-comic/367781).

Besides Chadhiyana #4, there were also two (technically six) free comics which were posted on both gentlemancthulhu.com and chadhiyana.com. On gentlemancthulhu.com there was a feud between Chadhiyana and Gentleman Cthulhu (When Worlds Collide 1 – 5) to help promote the campaign. Even though the campaign is over, there I still think they’re worth a read (as are the other comics on the site). As for the comic on chadhiyana.com, I posted a one-page Chadhiyana story, Chadhiyana: Vampyre Hunter, which was a practice page I felt worth sharing and which I may decide to explore further in the future.

More, though I haven’t written about it in a while, my Zazzle store has a few new products and designs which posted to the site just before the Rosarium campaign started. The new designs include my two very popular Alice in Wonderland pieces on a variety of products. Also now available are a few new products such as tea pots (featuring Gentleman Cthulhu) and clocks, as well as postage stamps featuring my most recent Cthulhu piece. You can browse the selections on zazzle.com/jmdesantis.

Also, in about two weeks’ time, I’ll be appearing at the second annual White Plains Comic Con in White Plains, NY (on Saturday, June 4th). Last year’s show was tremendously well attended and supported, and I’m hoping for much the same this year. For more information, you can check out the Bronx Heroes website (bxhcc.com) or the page on EventBrite.com (eventbrite.com/e/white-plains-comiccon-registration-20864591555)–unfortunately, it doesn’t seem like there’s a website for the White Plains Comic Con just yet.

That said and to bring it all full circle, though the Rosarium Publishing campaign is over, the campaign page is still open for donations, including pre-orders of Chadhiyana volume 1 (which keep coming in steadily). As written about extensively before, there is an exclusive mini-comic that comes with pre-orders of the first Chadhiyana trade, but only if you order through the Rosarium Publishing campaign. I’m not sure how long this will still be available, so if you’re interested in the free mini-comic, put your order in today: indiegogo.com/projects/rosarium-publishing-the-next-level#/

I suppose that’s all for this week. I’m hoping to catch up and get on to some things I’d been planning before the campaign launched, as it did force me to put a lot of things on hold. Thank you, once more, to everyone who contributed to the Rosarium Publishing campaign and especially those who pre-ordered Chadhiyana volume 1. I’ll see you next week with something new.