2017 is almost at an end (I know, it sort of snuck up on me too!), and there are a few things I have to finish up before the start of the New Year. Not least of these are a number of commissions for this end-2017/beginning-2018 commission season. I’m booked through the end of this year (though I might be able to fit in just one more person between Christmas and New Years if you act fast enough), but January is still open—which is the last opportunity to get a commission from me at my current prices before the price raise in February. But that’s not all… 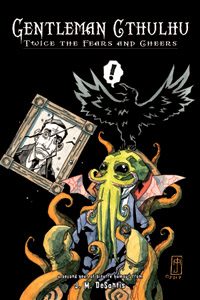 As I’ve stated before, my prints are on sale though my new store (jmdesantis.com/shop/) until Dec 31. Also available through the store are a number of original Inktober 2017, many of which have already sold. And last of all, the second volume of Gentleman Cthulhu comics, Gentleman Cthulhu: Twice the Fears and Cheers, is finally available through IndyPlanet: indyplanet.us/product/156187/.

Additionally, I’m just getting my two sketchbooks finished up and out to the printers (the Inktober 2017 sketchbook and the more general 2017 sketchbook—both of which are proving to be a bit more work than anticipated) and preparing for some new and continued work (including Chadhiyana and Gentleman Cthulhu) in 2018. But for now, I’m going to keep silent on some of those things.

I do want to point out again (and for what seems like the hundredth time) that I’m raising my commission prices starting in February 2018. It’s been a long while since I have, and I want to start putting more work into commissions, individually. Many of the commissions I’ve been doing for the past few months have been of a more detailed and less-rushed nature, and all at the prices I had been offering before. I’m only opening this window and promoting it now so that people have the opportunity to get a “newer style commission” at the old prices before they go up.

Next year will not only see new prices, but some new structure to my pricing. There will still be options for less expensive commissions, however, there will be limitations. But also, there will be newer options for more detailed work not offered before, and everything in between. You can see what’s current and what’s coming on my Commission Requests page (jmdesantis.com/commission-requests/). And again, act now before January fills up too.

That all said, I’ll have my yearly reflection up in two weeks, and then I’ll see you all in the New Year. I’m hoping to make it something special, if I can, as it will mark 10 years of being published professionally for me. But I’d prefer not to over promise. Let’s see what comes of it.

Until next time. Cheers!