After a little indecisiveness (on my part), it has been officially confirmed that I will be exhibiting at the White Plains Comic Con this Saturday. This is the first year for the show, which is being held at the White Plains Library in White Plains, New York. Though I know nothing of the venue, I have high hopes it is going to be a success, especially after my last show (Bronx Heroes: Women in Comics Convention). END_OF_DOCUMENT_TOKEN_TO_BE_REPLACED

Although my lack of social media posts on Saturday may have some thinking otherwise, this weekend’s Bronx Heroes: Women in Comics Convention was a lot of fun and a great success. Unfortunately, the area of the Bronx Library Center where the convention was held did not have good reception, so I couldn’t post about the many new Chadhiyana fans and others who dropped by my table to purchase prints, books and even my last copies of Night of the Living Dead: Reanimated! It seems to be a growing trend this past year or so, but of my three Bronx Heroes Conventions, this was by far the best yet. END_OF_DOCUMENT_TOKEN_TO_BE_REPLACED

If you’re in the Bronx this weekend, or planning to be, don’t miss you chance to see me at the Bronx Library Center this Saturday, May 2nd for the Bronx Heroes: Women in Comics Convention. Admission is free, as always for Bronx Heroes, and this time the focus of the convention is women creators and women characters. A perfect fit for my medieval Indian fantasy heroine, Chadhiyana! END_OF_DOCUMENT_TOKEN_TO_BE_REPLACED 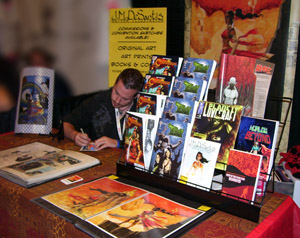 Until recently, I hadn’t updated my convention and show list for 2014 (on the Events & Shows page) in some time. This may come as a surprise considering I was an exhibitor or participant in an event nearly every month last year. This year is going to be a little different, at least for a while, and so today’s blog post is to give you some information about what to expect.  END_OF_DOCUMENT_TOKEN_TO_BE_REPLACED

I always enjoy doing interviews, especially at conventions. They’re usually quick, on-the-spot and taped (there’s an archaism for you), so you have to think fast. I feel I’m decent at them, though honestly, I think I could work on my delivery a bit (that camera can make you a little too self-conscious sometimes). Interviews are a great way to get exposure and to talk about your work. That said, check out this recent interview I did with SugarCayne.com at the Bronx Heroes Comic Con this past weekend. It was fun to do, so thank you SugarCayne.com for taking the time to interview me.

As I usually do after every convention, I just want to take a moment to thank everyone who came down to the Bronx Heroes Comic Con this past weekend and showed their support. It’s always great to meet fans, introduce new people to my work, and just talk comics and the craft. I’m glad so many people were responsive to Chadhiyana and enjoyed the comic. (I even had one woman read it immediately after she bought it and say she loved it! It’s always wonderful to get that kind of reaction.) Always a pleasure doing this show hosted by the incomparable (friend of mine), Ray Felix. Now to get back to work on that Chadhiyana graphic novel.

Returning for the second year in a row, J. M. DeSantis will be exhibiting at the Bronx Heroes Comic Con, held at the Bronx Library Center in New York City, this Saturday and Sunday. This is an exciting year for Bronx Heroes as this is the first time the convention will be extended over a two-day period (up from one day). So make sure you take the time to drop by and check out the amazing talent showcasing their work at the show. Oh, and don’t forget to visit J. M.’s table while you’re at it.

Back to Top | No Comments
Tags: Bronx Heroes Comic Con

The Fantasy Illustration section of jmdesantis.com saw a big update this week with new artwork and a slight format change. I had planned to post new art in most of the illustration sections after the Bronx Heroes Comic Convention (May 4th & 5th), but I was in need of something to post this week since the Boston Comic Con was cancelled this weekend past. (I’m still hoping they will reschedule, and I’m relieved the last suspect in the Boston Marathon tragedy was finally apprehended.) That said, there’s still more new artwork coming. END_OF_DOCUMENT_TOKEN_TO_BE_REPLACED

I just wanted to take a moment to thank everyone who stopped by my table at MoCCA Festival this past weekend and showed their support. For those of you who purchased a copy of Chadhiyana, I hope you enjoy the book and the character. Expect more. In fact, if I didn’t mention it at MoCCA, I’m already working on a new Chadhiyana project, the nature of which I will reveal on Wednesday for everyone who does have that information, whether they attended the show or not. END_OF_DOCUMENT_TOKEN_TO_BE_REPLACED

That’s right, folks, you read it correctly. Starting next week with the 2013 MoCCA Festival (April 6th and 7th), J. M. DeSantis will be appearing at one convention, every other week for five weeks! It’s already an exciting time for J. M. DeSantis with the first Chadhiyana comic having been published back in October and a new Chadhiyana project in the works (more on that next month). And now J. M.’s 2013 appearances are starting off with three conventions only two weeks apart from each other. END_OF_DOCUMENT_TOKEN_TO_BE_REPLACED