It’s been a good run of successful conventions this year, so it was bound to happen that one would prove a disappointment. While Eternal Con wasn’t an unsuccessful show by any means, it wasn’t quite as successful as the last few shows. Again, I’ve heard a lot of great things about Eternal Con over the past two years, so perhaps this year was just a fluke. After all, the word is the layout was changed this year and artist alley was scattered throughout the Cradle of Aviation Museum, making the artists extremely difficult to find.  END_OF_DOCUMENT_TOKEN_TO_BE_REPLACED

Although my lack of social media posts on Saturday may have some thinking otherwise, this weekend’s Bronx Heroes: Women in Comics Convention was a lot of fun and a great success. Unfortunately, the area of the Bronx Library Center where the convention was held did not have good reception, so I couldn’t post about the many new Chadhiyana fans and others who dropped by my table to purchase prints, books and even my last copies of Night of the Living Dead: Reanimated! It seems to be a growing trend this past year or so, but of my three Bronx Heroes Conventions, this was by far the best yet. END_OF_DOCUMENT_TOKEN_TO_BE_REPLACED 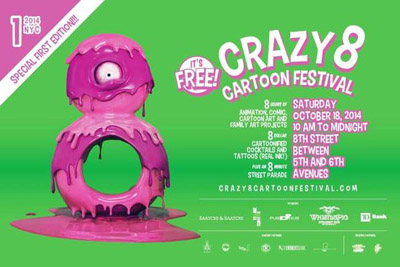 There are two things I want to cover this week. First, a huge thank you to everyone who came by my booth this past weekend during the New York Comic Con, and for helping me make this a successful show. Second, I want to remind everyone that this weekend is the Crazy 8 Cartoon Festival in New York City. So, without wasting too much space writing about writing about it, let’s get down to the details. (Scroll toward the bottom of this post for information on the Crazy 8 event.) END_OF_DOCUMENT_TOKEN_TO_BE_REPLACED

In that brief meeting, Bill spoke to me about his (then) upcoming book, ICONS: The DC Comics & Wildstorm Art of Jim Lee, and an acclaimed interview with Alan Moore. However, what struck me most about Bill was not his accomplishments but rather how humble and personable he was even in the presence of an unknown creator. I find very often those who have “made it” have little time for those who haven’t, but that wasn’t Bill’s way. I’m not the comic historian Bill was, so at the time I had no idea who Mark had introduced me to. However, over time, I learned just how legendary Bill was and not just as a writer, but as a person as well. END_OF_DOCUMENT_TOKEN_TO_BE_REPLACED

Chadhiyana Gets a 5-Star Review on IndyPlanet